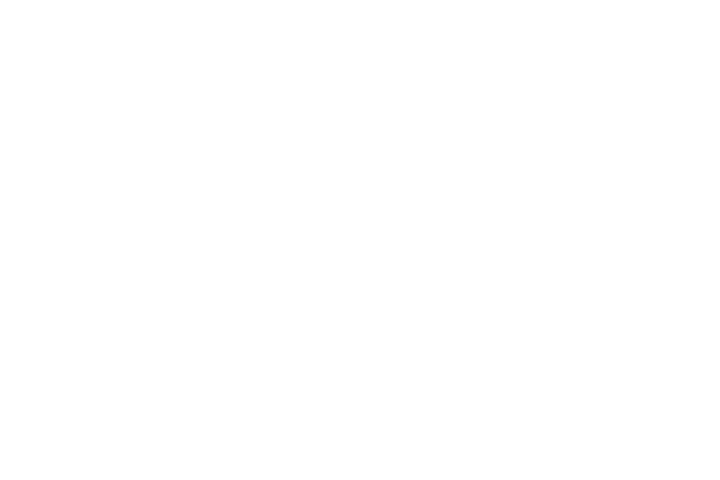 Safet Zec and his Venetian studio in Castello

Safet Zec works in Venice and Sarajevo. His studio in Venice is large and beautifully illuminated by skylights and has an interesting location. It lies close to a church with an imposing Palladian façade. Palladio’s work though stands half hidden. Doge Andrea Gritti’s home, now a wreck of the elegance and sobriety of the past, partially obstructs its view. Not too far, a rusted skeleton of a gasometer towers up in the middle of wild weeds. Nearby, a building painted in an improbable red colour hosts one of the most important libraries in Venice. Run by Franciscan friars, this library features ancient books by Aldus Manutius and the first Koran ever printed in the history. A high school is also nearby. When students leave the class, the silence of the area gets suddenly broken.

It is here that Safet Zec landed many years ago escaping from war in Yugoslavia.

A place of incongruity and yet of safe refuge, creativity and social engagement.

Born in 1943 in Rogatica, Bosnia and Herzegovina, he arrived in Venice in 1998, twenty years ago. His works have been exhibited internationally, Italy, Europe, the United States.

Safet Zec and the Church of Pietà

In 2015 he was invited by the Istituto Provinciale per l’Infanzia della Pietà in Venice to think of an art cycle to exhibit in the Church of Pietà, along the Riva degli Schiavoni. The Riva degli Schiavoni is an embankment by St. Mark’s square, where Dalmatian ships would dock in the past.

Dalmatian… is that just a coincidence?

But somehow the place where Zec’s paintings were just meant to be shown, influenced the painter that has come up with a site-specific cycle. These works can migrate and can fit in other exhibition spaces, but they belong to this church as the history of the place seems to have inspired the artist. A special bond.

A story of social assistance in Venice

At the time when plague and poverty seized Venice as the rest of Europe, the Pietà institute was founded by a Franciscan friar from Assisi in 1346. Pietruccio, as he was called, started taking care of the first victims of economic indigence, children. He founded an orphanage which is, in different forms, still active today. As other orphans’ institutes founded in Venice in the 16th century, the Pietà orphanage would welcome children that would be abandoned for several reasons and would struggle to give them a future. While boys would be taught a profession — and in the nearby Arsenale some opportunities could be found — girls would be taught to saw, embroider, make lace and, for the ones that were talented, to sing or play one or more musical instruments. Girls could rarely leave the institute, but music gave them a different social status.

Art as a means of mutual support

The story of the Pietà is quite famous indeed, as the musical tradition developed and changed the perspective, turning these orphanages into a kind of boarding schools, where girls from all over Europe were sent to learn music. Surely, you are familiar with Antonio Vivaldi, the Venetian born composer, violin teacher, theatre manager… and priest, too. He worked here for a long time in the first half of the 18th century and wrote many of his musical masterpieces for his choir at the Pietà.

Would have Vivaldi’s music been written, had there been no social emergency, as the stories of these abandoned girls?

But what strikes me most is that his beautiful notes became a source of income for this orphanage, as considerable offerings would be collected during the holy service accompanied by this female choir’s music.

The genesis of “Exodus” by Safet Zec

Safet Zec worked on the project “Exodus” between 2015 and 2017. At the beginning of 2017, exactly a year ago, he started painting in his Venetian studio. In a few weeks an extraordinary message found his way to us through his works talking about human migration. Hanging on the walls of the Pietà Church for a few months, during the Biennale, “Exodus” encountered a major success and was viewed by more than 160.000 visitors. Diaspora, solitude, abandonment. Hope, faith, suspension. Refuge and silence. Printed words, a red thread. One name. But, above all, art as an answer to the despair and tragical events we learn about, almost every day. The social mission of art

While I write, news reaches me that after a suicidal attack against “Save the children” in Jalalabad in Afghanistan, the ONG decided to stop their assistance in this country.

Safet Zec’s paintings narrate a story. They are life size. A raft packed with people of all ages dressed in rags floats as a modern version of Théodore Géricault’s “The Raft of the Medusa”. Ending with the gigantic triptych portraying the dead body of the three-year old child, Alan Kurdi, by the shore near Bodrum in Turkey. In 2015 Alan drowned during the shipwreck of an overcrowded boat that had to take him and his family away from war in Syria to a safer, new home. Art echoes from Tintoretto to Picasso

When I look at this work, echoes of Venetian art resound. In particular Jacopo Tintoretto’s “Serpent in Bronze”, the central painting of the ceiling of the Scuola Grande San Rocco. The dead bodies of the Jews poisoned by the bite of snakes lie on top of each other, in a serpentine spiral. Above more bodies, still alive, struggle for salvation and healing. Tintoretto’s work recorded the drama of the plague in Venice of those years. And finally, looking at the size of Safet Zec’s paintings, at the absence of colour and the choice of having used newspapers’ instead of canvas to paint on, one more echo reaches me. That of “Guernica” by Pablo Picasso. In Zec’s work, the collage of news and photos of real events appear under the painted surface or serve as miniatures of the art subject and its narrative, figurative power. A message not to be dispersed

The news reaching us may scratch the surface of our souls, but allows for indifference even if it tells the real facts. So Safet Zec starting from the printed sheets of newspapers or journalists’ photos brings us to a different level. The printed words get distant. A hand painted red thread instead becomes a hand written phrase, calling out for the name of Alan. And it leaves an open question we are urged to answer: “you are not alone…?!”. Safet Zec will continue his work in his studio in Venice, but “Exodus” (here’s the link to the past exhibit) needs our support not to be dispersed and to be given a home, now that the exhibition is over. Subscribe please the campaign! 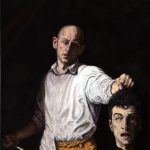 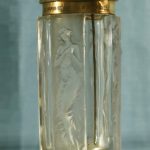 Perfume and scents in Venice, a long storyVenetian arts and crafts, Venetian history