Meeting with Leonardo D’Este in Venice

The first time I met with Leonardo D’Este, he was not there, but there were his paintings and they deeply struck my attention. His intense portraits were hanging in the weaving mill Luigi Bevilacqua, but not on the walls. They leaned on the ancient looms still used today in Venice to produce colourful silk velvet, more art work of a kind. I remember, they looked as if they were coming from a different world and from the past. No frame, a bare painted canvas.

I grew curious and met him in Venice, personally. We sat on a bench in campo Gesuiti in a sunny day. The children were playing soccer around us and while we talked, we looked at them. Leonardo said, we live in an era where you are not used to seeing. So he started helping me see. We looked at the light, at the faces of these kids, fleeing away.

Leonardo told me he had studied at the Art School and then attended the Fine Arts Academy in Venice for four years, till 2001. There he was left disappointed, because they didn’t teach him how to paint from life.

“I am attracted by the past, and I love the past”. “Just look at John Singer Sargent, a couple of brushstrokes and then life is there.” In the end, when you portray a person, you paint the light.

So after the graduation, he went to Greece to attend the school of Konstantinos Kerestetzis and then attended the painting courses at the Florence Academy of Art with Angel Ramiro Sanchez and at the Charles H. Cecil Studios. Funny, I thought. In Italy if you want to learn from the art of the ancient times, you need to revert to private schools or go abroad.

Leonardo D’Este and the sight-size method

Leonardo then mentioned the method he prefers. It’s called “sight-size”: the subject you want to portray and the easel are side by side, you then look at the person you are portraying from a distance of 4 or 5 meters and then you move back to the canvas, to leave your brushstroke. Because it’s only when you are distant, that you can see the whole.

Leon Battista Alberti in 1435 wrote: “Know that a painted thing can never appear truthful where there is not a definite distance for seeing it”.

As a portrait technique, the sight-size method was widely used by John Singer Sargent and his contemporaries, but stems in the practice of Titian, Antoon van Dyck and Diego Velázquez.

I felt so happy when he let me in his studio on the little island of Burano. His sister joined us and we talked about art, painting and portraits all afternoon in this tiny place, overwhelmed by the sunlight. We talked about ideals, too. How his parents that were not placing their ambitions on their children let them follow their natural inclinations. But also where he buys the canvas, what kind of oils he uses (“I make my own paint”). He would never stop painting: it’s often the model that needs a break and asks to stop. He says, he needs to be always there with his mind.

An artist’s studio in Burano

I looked around his studio and loved the place. He said he was lucky to have a room of his own, thanks to his brother’s help. Spread around you could see his brushes, the palette and the colours. Art catalogues featuring the art of the past Leonardo admires and gets inspired by.

“I keep on looking at them,” he said “and I go to see the art galleries at Ca’ Pesaro or at the Accademia Gallery as much as I can and I observe the ancient masters’ techniques”.

Portrait of a woman by Leonardo D’Este, detail, Burano

“Do you need the person to pose for long?” I asked. Leonardo explained he needs around twenty seatings of a couple of hours each. But then he needs to be alone. He needs to look at his work without the person to be portrayed as the work of art has to find its own sense and become abstract. While recalling life, it gains a life of its own. Simple like that, oh well.

An artist’s atelier has always fascinated me. It’s a matter of space, a creative space in several senses. A border ground where the artist meets with the model being portrayed, but where distance needs to be reached between the two while trying to get very intimate and close. “He gets non-affective when he paints”, said his sister Gloria.

A space where the artist confronts a tradition to be inspired by or to break with. Not to mention the space art creates on that canvas at the beginning standing white and untouched.

Leonardo D’Este in his studio in Burano

Burano as the island of painters

Leonardo D’Este is convinced that contemporary art with its avant-garde nature has reached quotations that have little to do with the value of the art work. Like a bubble ready to deflate.

So my thoughts wander back to the time in the 1910s when Burano was so poor that you could live with one lira a day, polenta and fried fish, fruits and wine from Treviso. Painters and sculptors like Pio Semeghini, Gino Rossi, Umberto Moggioli and Arturo Martini were living here on nothing. They were refused by the art venues as well as from the Biennale because they were too rebellious and moved away from the academic tradition. The “pesse in saor” (marinated fried fish in onions, vinegar, pine nuts and raisins) prepared by the artist-innkeeper Romano Barbaro was in exchange for their works. Hundreds of paintings still hang on the walls of this famous restaurant on the island.

True, these artists of the early 20th Century would represent the breaking point with the academic painting tradition whereas our Leonardo would like to get back to the great masters of the past. But in the art world where the main stream is controversial and provocative, what does it mean to be innovative? Fairly enough, a painting by Leonardo D’Este features on those walls of the restaurant, too, and if you ask the waiters working there what they think, they look at you and say: “That portrait really talks!” 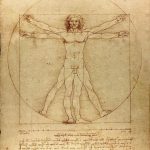 The Accademia gallery in Venice and the vision of Canova, Hayez and CicognaraVenetian art, Venetian arts and crafts, Venetian history